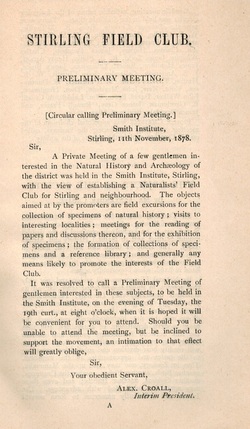 On 11 November 1878 a Circular was issued advising that 'A private meeting of a few gentlemen interested in the Natural History and Archaeology of the district'  had been held with a view to establishing a society to further study of the Stirling area.

The upshot was the establishment of the Stirling Field Club, its name changed a few years later to The Stirling Natural History and Archaeology Society. From 1879 until 1939 (with a break during WWI) this society met regularly and published its Proceedings every year.

The membership included some major figures, such as Alexander Croall, a botanist of wide reputation and Dr Robert Kidston, the palaeobotanist of international repute. Membership was never large but did reach around 90 gentlemen and up to 20 'lady associates' (who, despite including several regular contributors to the Transactions, could vote but could not be elected to the Society's Council, even after they could have been elected as MPs!).

The Transactions remain a major source for the history and wildlife of the area for a period of over 60 years and continue to be cited in modern publications.  They can be consulted in Stirling Central Library Reference Department and in Stirling University Library, amongst other repositories.

Anyone with spare copies or runs could contact the Stirling Local History Society whose members would be happy to complete their sets  enquire@stirling-lhs.org