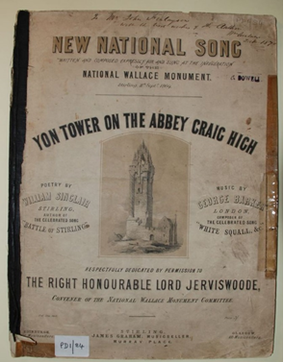 PD1/84 Stirling Council Archives
Over five hundred years after the Battle of Stirling Bridge a movement rose to build a permanent monument to William Wallace in Stirling.  Many credit the initial campaign to build the monument to the Rev. Charles Rogers who, despite having the reputation of falling out with anyone he ever met and attracting scandal at every turn, managed to set in motion efforts to raise support and money leading to a monument design competition and fundraising from 1856, when a ‘National Meeting’ was held in the King’s Park in Stirling on the 24th of June.

The Abbey Craig was chosen for the location of the new monument as it was thought at the time to be where Wallace oversaw the battle and it was also held to be ‘geographically the centre of Scotland’ according to publications at the time (‘The National Wallace Monument’, Rev. Charles Rogers, 1860, p4). Rogers wrote of the Crag in flowery prose:

‘Around is the conflict ground of Caledonian freedom; while the Crag seems a high altar,  reared by nature’s hand,  and consecrated a memorial of the nation’s victories’ (‘Ibid, p5).

The winner of the design competition was John Thomas Rochead of Glasgow, one of the leading architects of the day and the builder named as Mr Harvie of Hamilton.  Unlike other national monuments, the monument was funded by contributions from the public rather than by government, and partly for this reason fundraising was difficult to the extent that on more than one occasion it was questionable whether the monument might ever be completed. After intermittent and not altogether straight forward fund raising, the foundation stone was laid on the 24th of June 1861 by the Duke of Atholl to wide public enthusiasm.  When the monument was finally inaugurated in 1869 after eight years of building work, it was wildly over budget (almost double the original estimate) and had taken much longer than planned.

The inauguration ceremony, when the building was formally handed over to the Patrons of Cowane’s Hospital and other custodiers was covered in great detail by both the Stirling Observer and Stirling Journal & Advertiser newspapers.   There was a formal ceremony in the Armoury Hall of the Monument with ‘almost 100 gentlemen present’ (Stirling Observer 16 Sep 1869, p4).  Later in evening at 8 o’clock the monument was illuminated, followed by 30 minutes of fireworks (a full list of the 29 different types of fireworks is recorded in the Stirling Journal, 17 Sep 1869 p2).  There was even a 'new national song' titled 'Yon tower on the Abbey Craig High' composed to be sung on the occasion by William Sinclair!

The Stirling Journal & Advertiser journalist sent to record some of the later proceedings, the presentation of Dr Roger’s portrait by Daniel E. Fortune held in the Golden Lion Hotel, was refused admission so the ‘paper had to rely on coverage gleaned from The Glasgow Herald who had also reported on the event given its national importance. (Obviously the SJ did not want to crib news from its local rival, the Stirling Observer!)  However, both local newspapers contain verbatim accounts of all the speeches and the events of the day, although the Stirling Observer was scathing in some of its comments:

‘The memorial cairn erected on the Abbey Craig to the great champion  of Scottish Independence –Sir William Wallace – was inaugurated and handed over to its future custodiers on Saturday last...under circumstances  utterly void of public demonstration or enthusiasm.  The occasion was in striking contrast to the memorable event when the foundation stone was laid' 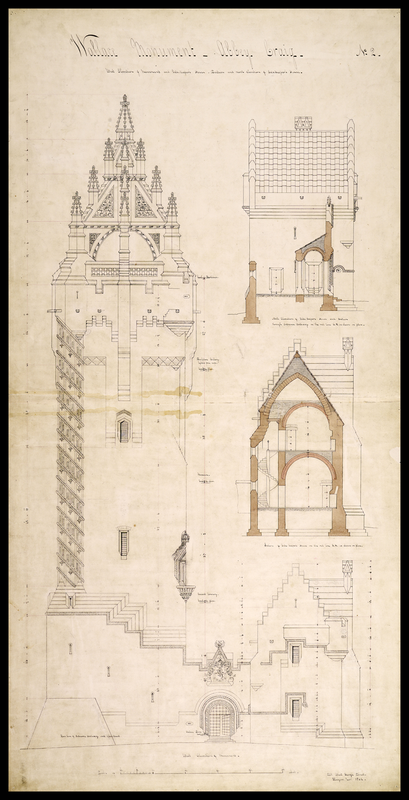