Archives Document of the Month for May 2014 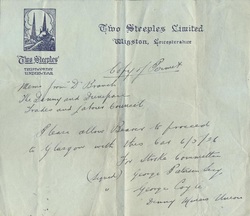 Copy of Travel Permit
To give some idea of the archives available for access, we highlight an example below.

General Strike, May 1926, Letter Requesting Compensation for damageto a vehicle...

Poor James Brodie, representative for ‘Two Steeples – Trustworthy Underwear’ found himself in a frightening situation during the General Strike of 1926. Driving back to Glasgow from Stirling in his Ford Commercial van, perhaps having dropped off a delivery of finest underwear to one of the shops there, he became embroiled in a demonstration by striking miners from the Denny pits. Having had one of his windows broken and being prevented from moving on, he was directed to ‘go into Denny to get a permit’ to enable him to proceed on his journey. It is likely that the striking miners believed that the van contained a strike breaker and that Brodie was forced to explain himself before he was allowed to move off. It must have been a frightening situation to find himself in.

The Denny miners were taking part in the General Strike, called by the British Trade Union Council at the beginning of May 1926 in protest at the proposed changes in pay and conditions for British miners. Support for the miners amongst other working people was very strong and feelings ran extremely high in mining communities; workers had seen their pay cut by 25% and the mine owners were posting lock out notices at the pits to prevent those who refused to agree to the new conditions from returning to work. During the period of the strike, May 3rd to 12th 1926, violent scenes were not uncommon as workers attempted to stop ‘blacklegs’ from keeping transport and other services moving.

The documents here are the letter written by Brodie after the event claiming compensation from Denny Burgh Council and his copy of the permit issued to him to allow him to continue to Glasgow unmolested. 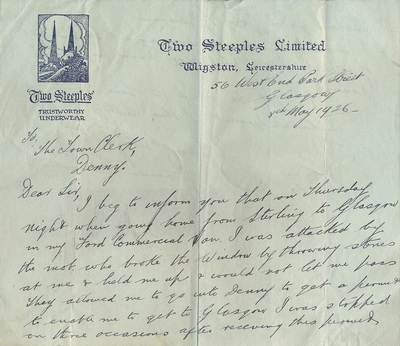 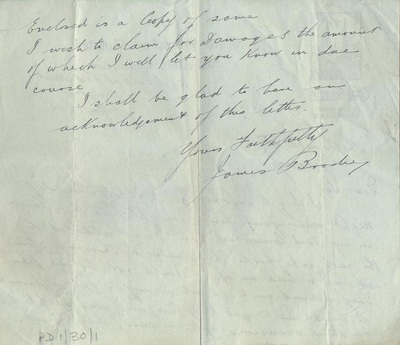