Only the Kenmarks application went ahead as the other two sites interfered with road alignments and the applicants would have been required to reduce the overall size of their pavilions. Messrs Kenmarks Ltd had already set up a roller skating rink in Perth and it was well established by the time their Stirling rink opened.

On the 27th October 1909, The Stirling Observer announced the imminent arrival in Stirling of a new purpose built facility for roller skating.

At the opening ceremony on the 4th November 1909, Provost Thomson took the chair making the opening remarks and his wife formally opened the venue stating in doing so that it would make an excellent substitute for skating on real ice which they got so little of these days. The rink was then open to the public in the evening and a very large number took advantage of the new facility.

The Stirling Observer reported that in the first 4 days of opening, over 3500 people were admitted, with over 1000 skating.  On the following Saturday alone, over 1000 skated and many who wanted to skate couldn’t for lack of skates. With such a capacity there were problems with queuing to enter and two policemen had to restore order. Inside, the skater mechanic and the skate boys were besieged by skaters asking for help to get their skates on and off again. Spectators formed the greatest users of the rinks and their continued attendance and entertainment was necessary for the business to succeed. 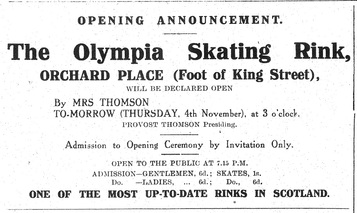 Advert in Stirling Observer 3rd November 1909
There was a dip in attendances when frost enabled the Raploch Skating Pond to open for ice skating in the third week of November and a carnival took place on the ice. When the thaw arrived, however, numbers picked up again at the roller rink. On Saturday 27th November 350 skaters attended the afternoon session and there were over 950 skaters over the whole day. Saturday had a relatively young clientele whereas during the week it was more mixed, with soldiers still in kilts and off duty police officers taking part along with other workers who had finished for the day.

The ownership of the rink was taken over by a number of local gentlemen and the going concern formed into a limited liability company soon after it opened. It was initially advertised as Stirling Roller Skating Ltd, then later as Stirling Skating Ltd, so it may have changed hands several times.
References: Stirling Observer articles, 1909 to 1911.
Royal Burgh of Stirling Council Minutes, 1909 to 1910
SLHS is a Registered Charity: No.SCO38247
Site and content copyright © SLHS All rights reserved