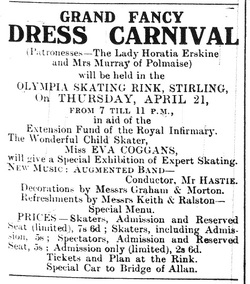 All skaters had to appear in costume and special dresses were reserved for children. These charity events had more families and married couples skating, with only the wealthier members of society able to afford the entrance fee of five shillings for skaters, two shillings and six pennies to spectate (three shillings for SNA event).

Messrs Graham and Morton specially decorated the building for the occasion and the roof beams were festooned with extra trophies, shields and flags. The band was extended to 18 in number for the night.  Electric lighting arrangements were done by Messrs Henderson Bros.

Numbers were hung below the signal to indicate the tune being played by the band so the programme could be followed more easily. There were also displays of exhibition skating.

£64:10/- was the total amount taken for the night for Stirling Royal Infirmary.Stirling Nursing Association was paid £35:13/-
from their carnival.
References: Stirling Observer articles, 1909 to 1911.
SLHS is a Registered Charity: No.SCO38247
Site and content copyright © SLHS All rights reserved