Archives Document of the Month for April 2013

This month’s item is taken from material recently deposited by Doune & District Scottish Women’s Rural Institute (SWRI).  The photograph and flyer relate to a production of ‘The Inn of Adventure’, a comedy in three acts by John Brandane, which was shown in the Muir Hall, Doune on Wednesday 4th April 1934.  Proceeds from the show were divided equally between the Vale of Teith Nursing Association and the Women’s Rural Institute.

Along with the photograph of the cast in full costume, we also have a programme for the production which lists the names of the players and crew.   As well as the ladies of Doune SWRI the production included some local male actors whose names are also listed. The reverse of the photograph and programme is signed by everyone involved. 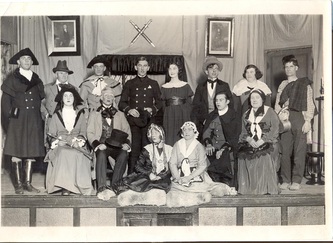 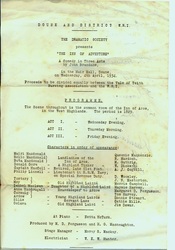 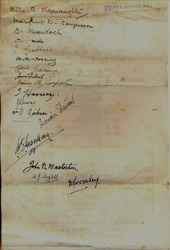