April’s document of the month will mark the 100th anniversary of the sinking of the Titanic. This tragic event saw 1635 lives
lost after the ship hit an iceberg some time between the 14th & 15th April 1912, including that of 23 year old Stirling man William Moyes. This report from the Stirling Observer of 23th April 1912 describes the senior sixth engineer on board the vessel Mr Moyes as former pupil of Stirling High School and Captain of Stirling County Rugby Fooball Club. 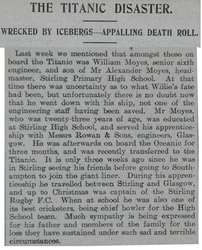