Ice skating carnivals had been successfully held at Airthrey Loch for several years in aid of charity before the accidental death of two skaters there in 1901. These carnivals had involved many skaters in fancy dress costumes and various lighting effects around the loch. Lanterns were also sold for the skaters to hold while moving round the ice. This type of carnival was repeated at Raploch and organised by the Town Council.

As reported in the newspapers ‘Wires were stretched across the pond and from these hundreds of Chinese lanterns were hung. Naptha lamps were also placed at intervals more particularly for lighting purposes, the others being intended chiefly for show. When the whole were lit as darkness began to set in a fine spectacle was produced.’

‘During the evening the brass band paraded the streets and afterwards marched to the pond followed by hundreds of the public. The pond was opened at 7 o’clock and people in costume immediately began to flock on to the ice. By this time however a decided thaw had set in, but not to such an extent as to interfere with the proceedings. Shortly afterwards the wind rose considerably with the result that most of the lights were extinguished and semi darkness prevailed. Owing to this unexpected occurrence both skaters and spectators were forced to crowd together on the ice between the island and the entrance gate. The dresses were excellent but could not be properly seen for want of light. Among the characters represented were Neptune, Red Cross Nurse, Zulu Chief, Executioner, Winter, Pack of Cards, Chinaman, Negro, Milk Maids, Pirate etc. The band played a selection of music during the evening. Over 500 paid for admission, drawings amounted to £25:18/-, just about as much as cover expenses. Refreshments were purveyed by Messrs Keith & Ralston.’

The continued frost led to another carnival on Wednesday evening 12th February. The lighting was repeated and this time an absence of wind and a keen frost made for perfect conditions. Between six and seven hundred were admitted this time and different costumes were noted by the newspapers. As before Stirling Brass Band played music and Messrs Keith & Ralston were the purveyors, drawing £32: 5/-, expenses £12.

On Friday evening 19th February another carnival took place at the skating pond and in order to give the working population an opportunity of participating in the skating, the prices were lowered by  half from those previously charged to 6d for an adult and 3d for a juvenile with 50/- given to the band for their efforts.

‘There was a very large turnout of spectators outside the fence and also of skaters and others inside. Although the ice was somewhat rough it did not lessen the enjoyment of skaters and onlookers. There were a great many excellent costumes worn and a considerable number were new from previous carnivals. Owing to the reduction in charges of admission, about 1300 people, most of whom wore fancy costume of some kind took part in the proceedings.

A cinematograph exhibition was given and was fairly successful though not exactly suited to a skating pond as the crowd collected on a small area causing some danger of the ice giving way. Stirling Brass Band played a selection of music and refreshments were provided by Messrs Keith and Ralston. Amount drawn was £28.’

It is not reported how the purveyor supplied the tea and coffee at the skating pond, but it must have influenced the decision for a refreshment room to be built at the pond. 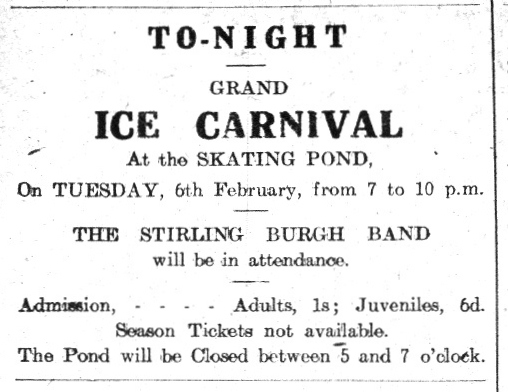 Tuesday 6th February 1912 advert in Stirling Observer.
It seemed that some people preferred ice skating to roller skating as a drop in attendances at the roller rink was reported for as long as the ice held good for ice skating. There may also have been some reciprocal effect, however, with the newly opened roller skating rink causing a lower attendance at the ice carnival than in previous years.

The loss shown on the 19th November was exaggerated by the use of additional lighting which was the largest expense of the night.

The preparations for the carnival necessitated the clearing and cleaning of the ice and the carting to and from the ice of the lighting used.

The carnival was advertised by the distribution of bills posted throughout the town and an advert in the newspapers.

The 6th February 1912 carnival did not take place due to a thaw and there was a letter of complaint in the 13th February, 1912, Stirling Observer. The Town Council simply took too long to decide to have one and there was a loss of at least £4: 17s 6d as a result of the cancellation. The lost opportunity to participate in a carnival would be more keenly felt with the demise of roller skating the previous year.

During the longest spell of skating of any winter there was still no carnival. On 2nd December 1925 the Town Council meeting agreed not to have an ice carnival in the meantime. It was suggested that the Burgh Band might play at the skating pond on Saturday evening instead if the frost continued.