Stirling's Tolbooth as a Prison 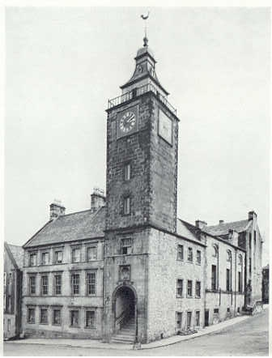 Cells in the tolbooth were built directly on to the street (right).
In 1844 the judge at the Circuit Court issued a public and damning statement on the conditions in the Stirling Tolbooth;

No doubt there were at one time, in some places, jails even more wretched than that of Stirling. But that was in some miserable places
in the North, and before an assessment [local tax] could have been placed on the counties at large;
but there has been no jail, to my knowledge, in which such a fearful state of things has existed as has been the case in the prison of Stirling.

With a table of overcrowding which, it was implied, risked not merely the earthly but the eternal welfare of the prisoners, the statement finally forced Stirling to act by building a new prison.