Archives Document of the Month for March 2014 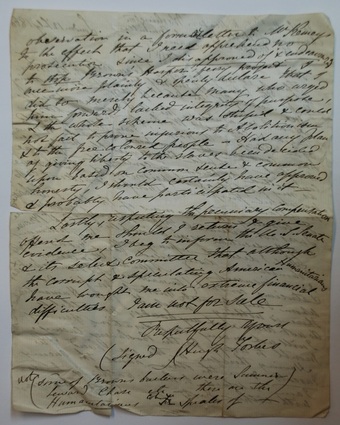 Hugh Forbes Letter dated 12th July 1860
To give some idea of the archives available for access, we highlight an example below.

Letter from the Stirling of Gargunnock Collection

Transcript of letter dated 12th July 1860, written and signed by Hugh Forbes and sent to James Mason, head of The US Senate Committee set up to look into The Harpers Ferry Affair (PD100 Stirling of Gargunnock Collection):

Hugh Forbes writes that if he had stayed in America and been seized as a witness and been forced to testify in The Harpers Ferry folly:-

‘ I should have refused to have testified and should consequently have been committed to prison for contempt - therefore as my perpetual imprisonment could serve no useful purpose , I thought it better to cross the Atlantic………………… Had I decided upon giving my testimony I should have disregarded  various risks I might have incurred - after the treacherous and atrocious conduct ( towards me ) of Brown’s backers whom I unfortunately mistook as friends there is nothing which the false Humanitarians do not deserve at my hands; nevertheless I will not on any consideration  open my mouth to testify for the proslavery enemy……on one hand the  rascals and on the other hand the enemy I am resolved to have nothing to do with either party……..had any plan of giving liberty to the slaves been decided upon based on common sense and honesty I should  certainly have approved and probably have participated in it. Respecting the pecuniary compensation offered me should I return and give evidence, I beg to inform this US Senate and its select committee that although the corrupt and speculating American humanitarians have brought me into extreme financial difficulties... I am not for sale’

Hugh Forbes was a former British soldier that had fought in the European revolutions in 1848-49. He had fought under Garibaldi in Italy (PD100 Stirling of Gargunnock collection has various letters of commendation about him), and after that failed effort had ended up a silk merchant in Florence. Forbes left his wife and family behind in Italy around 1855 seeking his fortune in America. He landed in New York City where he struggled to make ends meet working variously as a fencing instructor, part-time journalist, author, and speaker.   Forbes was also author of a book titled ‘Manual for the Patriotic Volunteer; On Active Service in Regular and Irregular War; Being the Art and Science of Obtaining and Maintaining Liberty and Independence’, which well illustrates why the abolitionist, John Brown would have felt he had met a kindred spirit.  After his involvement in the fateful Harpers Ferry Affair, as the above letter clearly states, Forbes judiciously decided to return to Britain to avoid involvement in the trial or possible imprisonment.

The abolitionist, John Brown wanted to use insurrection to overthrow slavery in America.  In 1859 he planned a raid on the federal Armoury at Harpers Ferry, Virginia with a view to arm slaves and start a liberation movement.  To his end, he contracted Hugh Forbes to train his men but due to disagreements over tactics and Brown’s inability to pay, the deal broke down and Hugh Forbes blackmailed Brown, threatening that he would reveal his plans. The raid eventually went ahead but it was unsuccessful, with John Brown being arrested, tried and found guilty of treason and hanged in Charles Town in 1859.  John Brown and the Harpers Ferry incident captured the nation’s attention, focussing attention on slavery and the abolition movement like never before, and his raid and the resulting trial escalated the tensions leading up to the American Civil War.