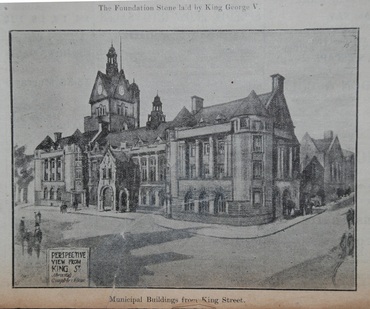 July 2014 sees the 100th anniversary of the laying of the foundation stone of Stirling’s ‘B’ listed Municipal Buildings, Corn Exchange Road.  The foundation stone was laid on Saturday 11th July 1914 by King George V during a royal tour of central and eastern Scotland.

This event is covered by a full article in the Stirling Observer (Tuesday edition, 14th July 1914[1]).  The costs of the building were estimated to come to a total of £30,000 with a new road from Spittal Street to Dumbarton Road also included although the town council decided to proceed with only the Back Walk portion of their plans which reduced the cost of the project to £21,000.  The building was designed to house an Assessor’s Office, Collector’s private room and strong room, Chamberlain’s offices, Medical officer and health visitor, Council Chamber (41 ft long x  30 ft wide a 24 ft high to the arched ceiling) with an oriel window projecting over the Council entrance.   There were also rooms for the Master of Works, Town Clerk and the Provost as well as a Council officer’s flat on the premises.  The article goes on to note that ‘A hose drying room could be formed in the height of the tower’ which must have been useful indeed!

After a competition, in 1908 the town council declared the winning design was that entered by Architect Mr J Gaff Gillespie of Salmon, Son & Gillespie but building only began in 1914.  The prize offered for the successful design was 100 guineas (one guinea equalled 21 shillings).  Gillespie’s design was noted in the Observer as ‘based on Scottish architecture...with simplicity and strength in the mass and a hint borrowed from France in the detail’[2].  The newspaper coverage of the 14th July gives a full list of the main contractors in the project, including the sculptor who was A W Young.

After the foundation stone was lowered into place the royal party drove off by motor car to partake of luncheon with the Duke of Montrose and other invited guests at the castle before departing for Falkirk via St Ninians.  The building was eventually officially opened for use in 1918 with the first town council meeting there on the 8th of March.  The Stirling Observer noted ‘There was no formal opening, anything of this nature being postponed...owing to the war’[3].

The municipal buildings have had various additions such as statues, bells and extensions over the years, including 1937 and 1965-8[2] and indeed there have been alterations to the building up to and including last year.  The buildings remain both useful and attractive premises to this day, and remain well known and liked by the people of Stirling.

[2] For full details of the architectural features of the building see pp709-710, ‘The Buildings of Scotland, Stirling and Central Scotland’ by John Gifford and Frank Arneil Walker (Yale University Press, 2002).