Archives Document of the Month for June 2013 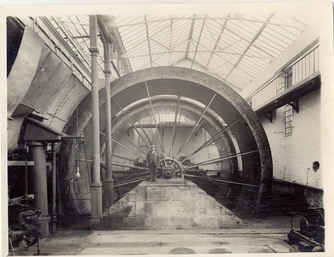 Water Wheel at Deanston Mill, c 1930
To give some idea of the archives available for access, we highlight an example below.

These images show one of the four water driven wheels which powered the cotton works machinery, and the looms which wove the cotton in the weaving shed.

The machinery was driven by water diverted from the River Teith to waterwheels by a lade 1500 yards long.  At its peak (around 1844) the Deanston Mill employed over 1000   workers.

The sheer scale of the wheel shown in this image can be seen in comparison to the height of the man standing in front of it.  One can only imagine the noise, vibration and sheer power that the wheels produced while working.  The wheels finally stopped turning in 1949 when they were replaced by hydro-turbine and a steam electricity  generating plant which was then a more efficient method of powering the looms. 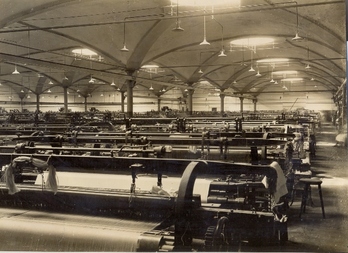 Machinery inside Deanston Mill
The owners, James Finlay & Co. finally closed the mill in 1965 and the site became a whisky distillery soon after.

These images were recently donated to the Archive along with other material regarding Deanston Works and papers relating to the Duncan family who were involved in the   cotton industry both at Deanston and Catrine (Ayrshire), reference A1718.
SLHS is a Registered Charity: No.SCO38247
Site and content copyright © SLHS All rights reserved