In the late 1800s Stirling had a skating pond near the Raploch but it had ceased to be used for skating and was instead being filled up as a coup for public refuse. In 1899, the Town Council began looking for another site for a skating pond. Having agreed a site not far from the previous pond they secured the finance to build it from the local Philharmonic Improvement Fund and started work in 1900. It cost just over £500 to build. It was opened on 9th February 1901 when there was ice available for skating. Map of skating and curling pond in Raploch.

In 1899, when the Town Council decided on the site, they estimated that yearly expenses for the Raploch skating pond would amount to £78 per annum, while income would average £68 per annum.

In actual fact over its 37 years of existence, the pond made an average of just over £25 per year, while annual expenses were slightly under the estimate at £72. On several occasions the pond required major repairs to the embankment and fence but overall the pond required little extra in the way of upkeep, simply the cutting and clearing of grass before it was flooded each season. Even the destruction of the pay box by fire was covered by insurance and the paybox was reinstated. 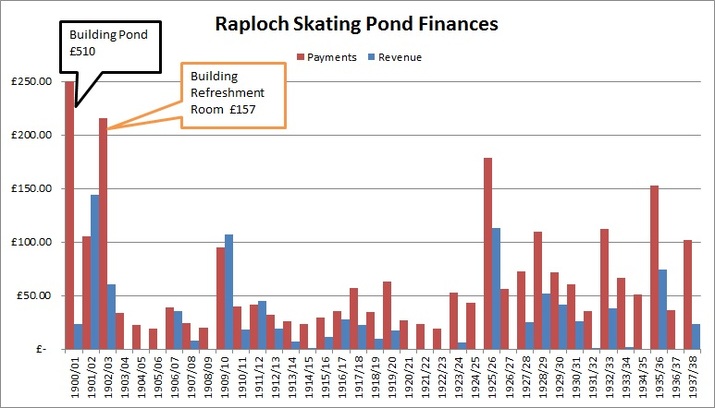 From Royal Burgh of Stirling Council minute books 1900 to 1938
The over-optimistic income estimate was caused by assuming there would be income every year.  In fact there were only 25 years out of 37 where any income was brought in for skating.  The longest continuous period of skating was from 1909 to 1920. In terms of days of possible skating there were two or three days per year on average, with the winter of 1925 having the longest spell of skating at three weeks. There were two periods of three seasons with no skating, 1903 to 1906 and 1920 to 1923 being the longest gaps.

Where there are actual admission figures, it is clear that a Saturday was always the most popular day if skating were available. It is also shown that the longer the ice remained available, the busier the skating pond became. This may be due to the need for word of mouth to spread the news that skating was available and skaters no doubt returned frequently to enjoy their pastime while it was available. Newspaper reports most often appeared after skating had ceased because of the short spells when the pond was open.

There are few reports of accidents or bad behaviour at the pond, although complaints were made public about the state of the ice on occasion. This was to be expected since ice forming was a naturally occurring process over which the Town Council had little control.

Illuminated Ice Carnivals held in the evening involving fancy dress costumes provided a spectacle for skaters and spectators. However they were risky to stage due to the fickle weather. There were three successful ice carnivals held in 1902 and a lesser one in 1903 which used the new refreshment room built that winter. There was a slight loss on a carnival held in 1909 and in 1912, due to a thaw, a bigger loss was made as a planned carnival had to be cancelled after being advertised in the newspapers. Although other opportunities presented themselves for ice carnivals, they were never held again. The Town Council may have become too cautious about staging another carnival after the failure in 1912.

It is unclear how necessary the refreshment room was to the success of the skating but the cloakroom and lavatory were essential services and an additional income for any leasers. In financial terms, this was the Town Council’s only significant investment in the skating pond but they received no return from it.

Comparing the curling record of local clubs to the use of the skating pond gives a favourable impression of the site as an ice rink as it appeared that skating was possible on many more days than curling elsewhere. So despite the site’s disadvantage of being open to the afternoon sun it performed reasonably well in these conditions.

When not used for skating the ground was for a long period used for the grazing of livestock from Raploch Farm. For two years, 1903 and 1904, the Yeomanry used the pond area for exercises in the summer. In 1924, with housing encroaching on the area, a children’s playground was tried for a year. It then reverted to grazing until in 1929 football pitches were established adjacent to the pond. This led to football clubs using the refreshment room for stripping while they played on the football pitches. When the pond was closed, a football pitch was established in the pond area, but later abandoned. A road and more housing eventually took up the northern part of the pond. It is still possible to see the southern part of the pond today and it still fills with water in heavy rain.