In May 1911, the Daily Mail sponsored a Circuit of Britain Air Race. The aim of this event, which offered a prize of £10,000, as to encourage aircraft development. The race started from Brooklands in Surrey on 22nd July 1911. It proceeded as far as Edinburgh and returned via Exeter and Brighton. There were eleven compulsory stops on route, including Stirling. This event triggered great excitement locally. By the time the first plane arrived in the Kings Park at 3.45am on 25th July, about 8,000 people had gathered in the Park. The “landing area was cordoned off by a rope” – “flares and landing lights marked
out” the ground, for the “guidance of pilots” and “safety of onlookers.” Seventeen competitors entered this race; nine of the flying machines entered were British and only four competitors finished it. The race was won by Lieutenant Jean Louis Conneau under the pseudonym Andre Beaumont flying a Bleriot XI monoplane. He completed the race in 22hrs 29mins 6sec. 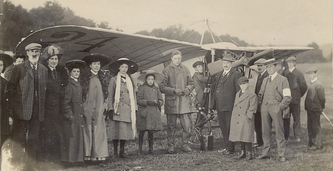